“Their victories do not equate to your failures.”

That’s a mantra of sorts for me. I came up with it somewhere around age forty when I had a personal epiphany about myself and how I reacted to other people’s “successes.”  I realized I was allowing their accomplishments, big and small, to make me question my own abilities. I was trying to seize myself up against them. This need to compare stems from some deep-rooted confidence issues, I know. And it took me a while to see it. But now that I know that trait is there, I’ve been making a concerted effort to head it off before it can get in my way. And I’ve done a decent job, though I have to admit, it’s been especially difficult since entering the indie author world.

Or more specifically, the dark realm of social media.

For an excruciatingly slow writer, seeing post after post of authors celebrating the release of their umpteenth book is painful. I cannot fathom being able to crank out a full-length novel in under a year, let alone four or more. Yet that is what some are able to do.

Yes, I work full time. Yes, I have family obligations, a house to care for…yadda, yadda, yadda. But those obligations aren’t unique to me. Plenty of other writers have those same time-sucks (and more!) and yet are prolific little literary rabbits.

So, why do the words come so quickly for them but so slowly for me?

Perhaps it means I’m not meant to be a writer. Or maybe, I’m just not a good writer. Because a real writer wouldn’t struggle to bring their story to life, right?

And then I stumbled on this little gem: Your Thinking Rate Is Fixed.

In this blog, the author discusses the concept that the speed with which we think and make decisions is set and cannot be sped up. And while the article is primarily focused on decision-making in the workplace, I think it applies to writing as well, for doesn’t crafting a solid story require thousands of decisions?

Does my character go here or there? How does he/she react? Which action verb best conveys the emotion he/she is feeling? What plot twist will keep the pages turning?

As an author, I think about each and every one of those questions. A lot. I roll them around in my mind. I take them for walks. I sit and stare silently at them, waiting for them to talk to me.  And in truth, I do this with nearly all things in my life. I am also terrible at debates, because I can’t process someone’s points fast enough to come back with a good counterpoint. It’s usually days later when I think of the perfect thing to say. Because by then, I’ve had time to consider the statement or question from all angles, to haul forth other information from my brain’s cache store and apply it.

I certainly don’t blame ALL of my sluggish production on the fact that my thinking rate is set to “tortoise” rather than “hare,” but it does relieve some of the pressure. Because like other things I can’t change about myself, such as my height or the size of my feet, I can let it go. I don’t have to waste any more time and effort trying to combat it. Instead, I can move on to the things I can control, like not comparing myself to anyone other than the person in the mirror.

Stropharia rugosoannulata photo from wikimedia   It would appear that I have a wilted thumb when it comes to growing peas, carrots, be... 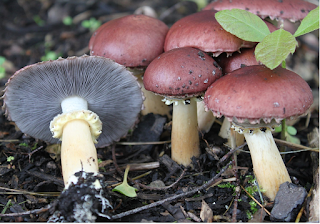