A Mother's Love ~ by Cynthia Cain

The year had plenty of triumphs, the end of the Vietnam War, NASA launching the first joint space flight with the Soviet Union, the first blockbuster film, Jaws, is released, (which is the scariest movie I had or will ever have watched.) Technology was moving forward at lightning speed. But the most vivid innocent that happened that year had nothing to do with the outside world but would stick with me forever.

As if being an awkward introverted eleven-year-old, who wore 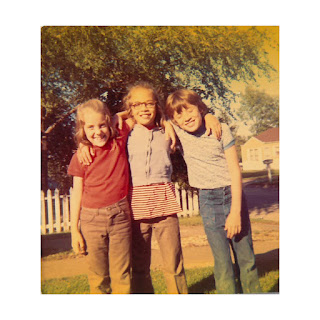 glasses and sported second hand clothes from a cousin that was clearly larger then me wasn’t bad enough, let’s talk about the rain. Yep, that’s right, rain and the moment it turned me into a horrified carpet blob fighting for the last little piece of dignity that I had.

It was Tuesday, a school day, around seven in the morning when a clap of thunder shook our tiny two bedroom bungalow and woke me from a rather interesting dream about turning myself into a winged creature with the flick of my hand. Even at an early age my dreams were fraught with adventure.

My two sisters and I quickly dress and hurry into the kitchen for a scrumptious breakfast of dry toast and oatmeal. A staple in our house, cheap and fast, a quality my mom still takes pride in today. While sitting at the kitchen table the storm intensifies. Rain pelts the window and the day turns back into night.

“Well, girls, I don’t have the car today.”
My little sister jumps to her feet and heads back to the bedroom.

“I have an idea.” Mom bolts to the kitchen, rummages under the sink and then returns with a box of trash bags.

Even before we can grasp what is about to happen, a mortified look 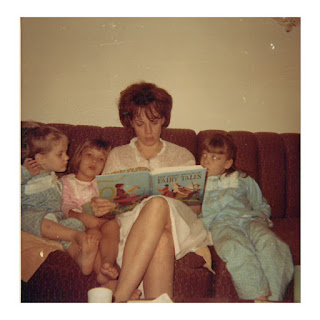 crosses Cheryl’s face and she begins to cry. Not that it took much for her to cry. She cried when she was happy, sad, sleepy, awake, it didn’t matter where, when or who we were with. It was her only defense. Chris and I believed that we damaged her when we stuffed her into a suitcase at the age of three and told her we were sending her to the moon. The broomstick we used to mimic the sound of asteroids hitting the suitcase wasn’t the smartest thing to do. Mom made sure we’d think twice about ever doing that again.

We follow mom into her bedroom, where she proceeds to thread the old singer sewing machine with black thread to match the trash bags.

“Christine, come here.” She holds the bag next to her. “I think this will work.” she slips the trash bag over Chris’s head.

Chris’s hypochondriac screams of panic are muffled within the plastic. Mom struggles to cut a hole in the bottom of the bag as Chris thrashes about. Finally, her head pops through. Her eyes are wide, her face is flushed and her hair is balled up in a mass of curls.

“Now, hold still.” Mom says as she diligently pins and cuts the bag to fit. She carefully removes the bag and proceeds to sew along the edges. A few more tucks, cuts and pins and there it is. Mom proudly displays the trash bag raincoat she’d just created. She even sews a belt out of the scrapes.

Now, if you have really ever taken the time to smell a trash bag, you’d know that there is a distinct odor to them and it’s not a pleasant one.

Chris has a “need to please” attitude when it comes to our mom, so she slips it on with only minor encouragement. Cheryl hides under the bed covers and cries. I melt to the floor while thinking about the humiliation and constant teasing this will cause.

“Stop being so dramatic,” Mom grabs onto my arm and tries to pull me to my feet. My body hangs limp. “Stand up!”

“Cynthia Anne, I’m giving you one more chance to stand up.” Her face molds into an unmistakable look of irritation.

The situation plays over in my head, if I don’t stand up, what then? Will she drag my limp body the three blocks to school in the rain? I think not. A resounding “No” slips out before I can stop it.

“Wait ‘til your dad gets home.”

And there it is—when all else fails she uses our dad to instill fear. My dad was a gentle giant in my eyes. He was bigger than life and although he always backed my mom up when it came to us girls, he tried hard to be fair. I just hoped that he would find my plight against the trash bag raincoat justifiable.

Chris eggs mom on. “I think these look great, Mom.”

Mom leans over my lifeless body, “See, they’re not that bad.” She says.

Hanging my tongue out the side of mouth, I roll my eyes up and don’t respond.

Cheryl continues to cry, while reluctantly slipping the bag over her head. Mom sizes up the two of them and then an exasperated sigh escapes her as she rushes to the kitchen and returns with wonder bread wrappers. “These will protect your feet,” she says. Slipping the blue, yellow and red poke-a-dotted bread bag over their feet, Oh, the horror!

Chris leans over my body and tries to encourage me up. “Don’t make mom feel bad.” 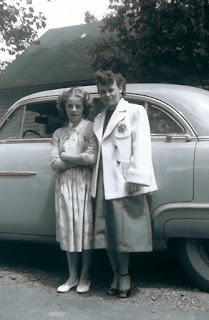 front door. She gasps, “Oh Lord, no grandchild of mine is going to school like that.” Grandma was a well-dressed woman who never left the house without her hair done up, her fingernails painted and makeup on.

“What are you doing here?” Mom asks.

She discreetly winks at Chris before turning back to mom, “Thought maybe the girls would like a ride to school,” she says with a smile. Chris had Grandma wrapped around her finger and on this day, I was most thankful for that.

Within seconds, Chris and Cheryl strip off the plastic raincoats and run out the door with me right behind them.

This was not the first time nor would it be the last time that my mother’s brilliant ideas, as she called them, would make us cringe and question her sanity.

But it wasn’t until the day I held my baby for the first time that I really understood what a mother’s love felt like and the overwhelming need to keep my child out of harms way. It was then that I knew one day I, too, would become that insane parent that would unknowingly embarrass my child trying to keep them warm, dry and safe.

Cynthia Cain lives in the Midwest where - when she's not chasing after her dogs or hanging out with her children, grandchildren, family, and friends - She stays busy working, writing and contemplating every paragraph she drafts. She loves to travel and is inspired by the places she visits and the people she meets. She is a member of the Midwest Writers' Center and continues to advance her craft through conferences and online courses.

Her debut novel Quiet Waters, is a YA Paranormal Suspense.